2015: The year that the strategists nailed?

After the market’s dramatic plunge in August, strategists’ year-end targets were looking like long shots. But as the S&P closed out its best month in four years, it seems like stocks could be rising to the occasion.

In October, the Dow Jones industrial average and S&P 500 rose more than 8 percent in five straight weeks of gains. The Nasdaq composite ended October up more than 9 percent. And stocks have continued their rally into November, with major indices opening up more than 0.5 percent on Monday.

For the past six years, stocks have surpassed strategist estimates. But for 2015, many have called for the S&P to end at or above 2,200, which is 5 percent higher than where the index opened on Monday.

Technician John Kosar of Asbury Research said he sees stocks returning to their highs of the year in the next couple months, based on the recent run-up of total net assets in the SPDR S&P 500 ETF (SPY).

“Once that trend of expanding assets really caught fire at the beginning of October, that’s when we had a nice move higher,” Kosar said Friday on CNBC’s “Trading Nation.” “Those assets are about as high as they’ve been now in several months; as long as they continue to expand, we’re going higher.”

Click the title at the top of the page to view the entire column at CNBC.com. 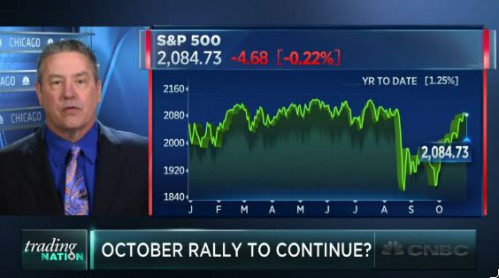