I have 37 years of experience forecasting global financial markets. Opinions expressed by Forbes Contributors are their own. 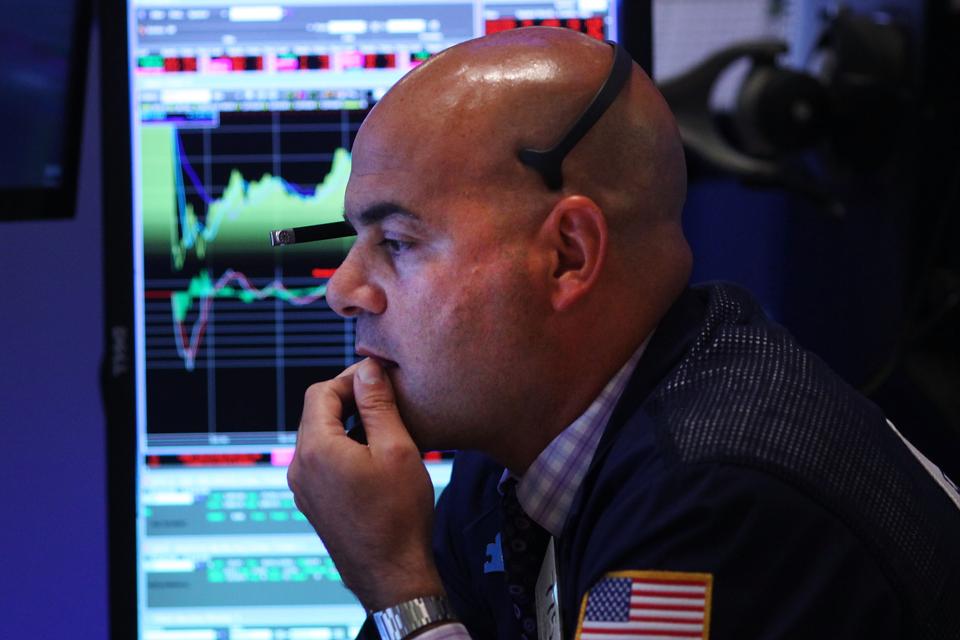 In my August 5th article for Forbes I identified an important bearish reversal in market bellwether Amazon.com AMZN -0.27% and said that, considering its status as the 5th largest U.S. stock and positive statistical correlation to the S&P 500, could be the “canary in the coal mine” that helps lead the broad market into an overdue corrective decline.  Amazon.com AMZN -0.27% has since declined by 3% and looks vulnerable to more near term weakness.

Meanwhile, the benchmark S&P 500 (SPX) began last week with a strong rally as investors initially “bought the dip” into underlying support at the 50-day moving average, a Pavlovian response to many years of dependable accommodation by the Federal Reserve that has remained ingrained in investors’ psyche long after Quantitative Easing (QE) ended in October 2014.  This time, however, the rally failed two days later, on Wednesday August 16th, and the US broad market index subsequently collapsed to fresh lows on Friday, August 18th, losing 0.7% for the week while falling to its lowest level since early July.

In addition, a bearish chart pattern in a market-leading semiconductor index, growing apprehension in the bond market, and $1.6 billion of new money that has recently been put into the red by last week’s decline in the Dow Jones Industrial Average (DJIA) collectively warn that last week’s decline will continue into months end, and potentially into September.

The colored highlights in Chart 1 below show that the SPDR S&P Semiconductor ETF (XSD) broke down from 2 months of sideways investor indecision on August 10th, retested that breakdown area on August 16th, failed there, and finished Friday’s session on its weekly lows. 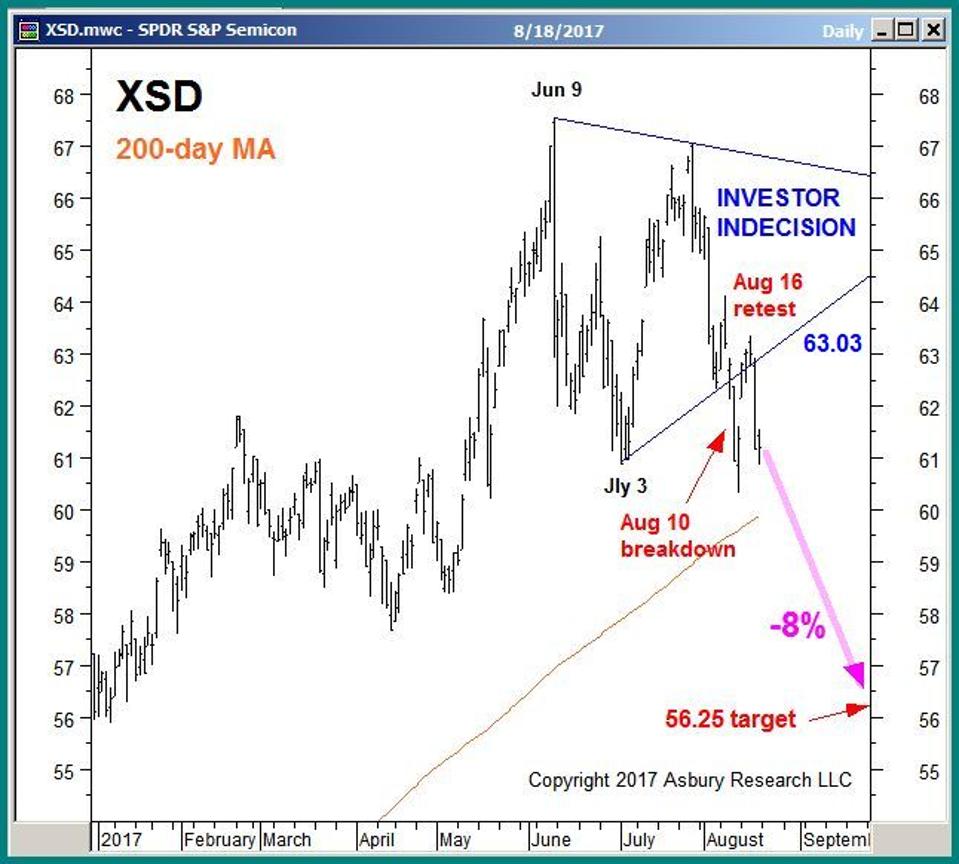 This bearish pattern targets an additional 8% decline to 56.25 that will remain valid as long as the lower boundary of the indecision area, currently at 63.03, continues to contain the ETF as overhead resistance.

This is particularly important because of XSD’s nearly lockstep positive correlation to the market leading PHLX Semiconductor (SOX) Index over the past decade, as well as semiconductors’ historic tendency to lead the broad market S&P 500 both higher and lower.

Dow Performance Chasers Are Now In The Red

The green highlights in Chart 2 below show that the daily total net assets invested in the SPDR Dow Jones Industrial Average ETF (DIA) exploded by $1.6 billion or 10% since July 31st.  This aggressive performance chasing indicates that 10% of the total net assets invested in DIA were added at 21,862 or higher relative to the actual Dow Industrials (DJIA), and suggests the Dow has become top-heavy and particularly vulnerable to a corrective decline. 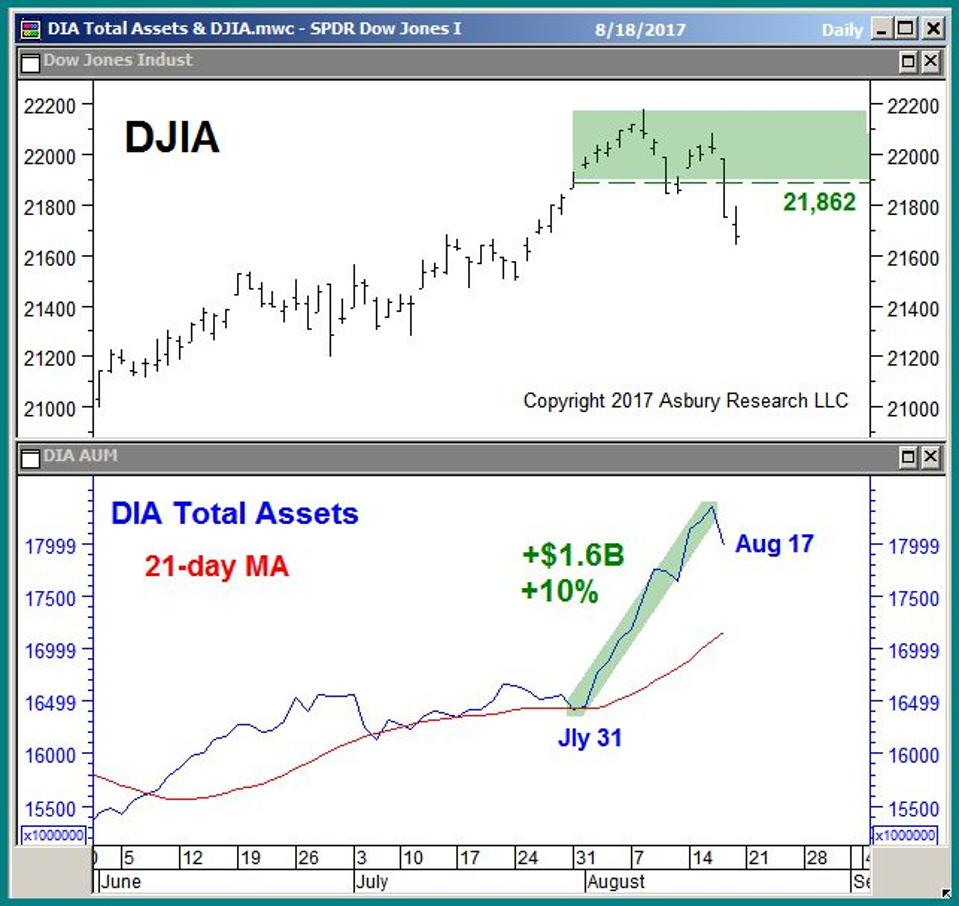 The Dow closed at 21,675 on Friday.  This means that all of this “new money” is now in the red heading into next week.  Any further market weakness will likely encourage these investors to liquidate their positions, potentially driving the market down even further over the near term.

Click the linked title above to view the entire article on Forbes.com