The Key To Avoiding A Fall Stock Market Correction

I have 37 years of experience forecasting global financial markets.

Opinions expressed by Forbes Contributors are their own. 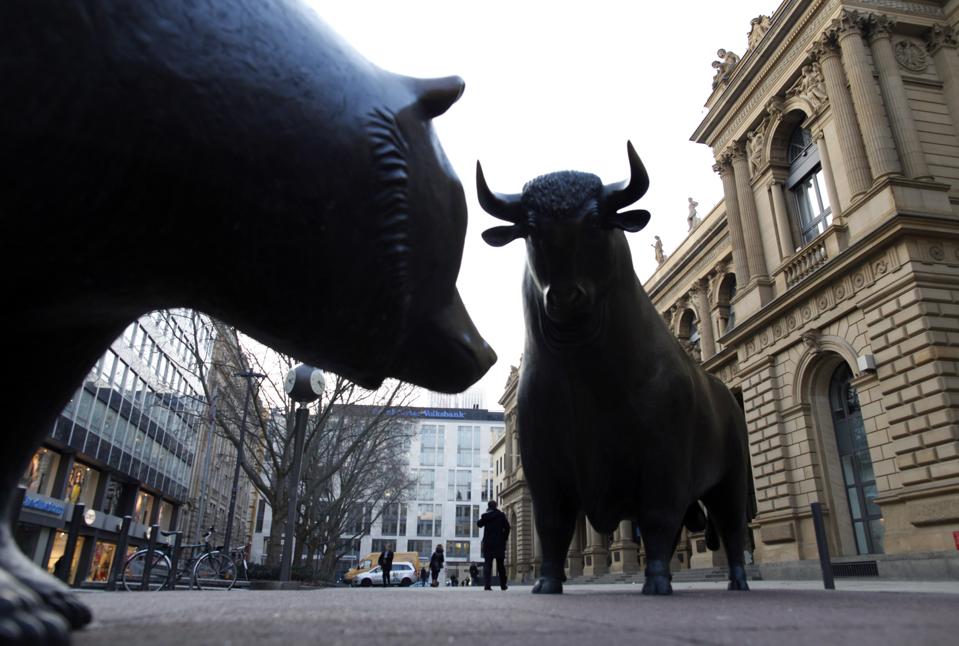 Semiconductor stocks, which tend to lead the U.S. stock market both higher and lower, have recently made an abrupt and unexpected upward reversal which, if it holds, is likely to lead the broad market to new all time highs by year end.  If this bullish reversal fails to follow through over the next week or so, however, it will warn of an emerging market correction that could extend into October.

Buckle up.  The current combination of geopolitics and seasonality that includes two hurricanes, the ongoing nuclear threat from North Korea, Special Counsel Robert Mueller’s investigation into the Trump Campaign’s involvement with Russia, and the US stock market’s seasonal tendency to be weak from now through mid October, collectively set the stage for a potentially treacherous autumn for investors.

Regarding seasonality, many financial asset prices have a statistical tendency to rise and fall at certain times of the year.  Crude oil prices are historically their weakest during the 4th Quarter, gold prices seasonally peak for the year during August and September, and global equity prices typically bottom in September. Chart 2 below shows that September is by far the seasonally weakest month of the year in the S&P 500, on average since 1957 closing 0.72% lower for the month.  Moreover, since 1957, the S&P 500 has posted a negative monthly close 57% of the time, its highest incidence of a negative close for any month during this period. 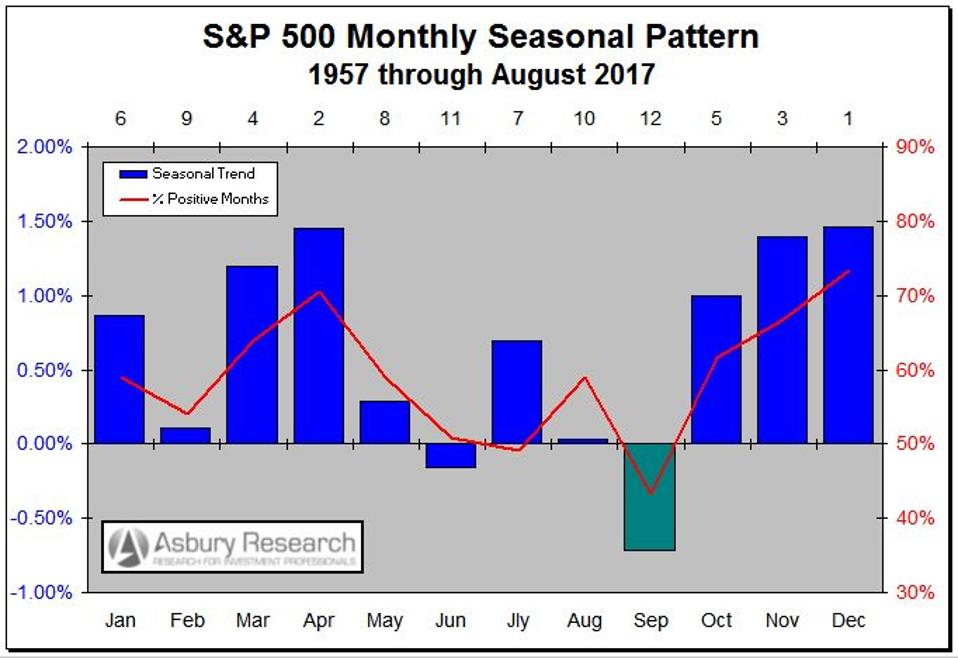 So, this year, weather and geopolitics are playing right into the hands of an already tough period on the calendar for U.S. stocks.  There may be a light at the end of the tunnel, though.

In my August 20th article for Forbes, I pointed out that a recent breakdown from months of sideways indecision in the SPDR S&P Semiconductor ETF (XSD), a surrogate for the semiconductor sector, targeted an additional 8% decline.  I am always particularly interested in what semiconductors are doing because of their historical tendency to lead the U.S. broad market both higher and lower.

Since then, however, the trajectory of the semis, and of the market itself, has made an abrupt 180 degree about face, amazingly on Tuesday August 29th following the news that North Korea fired a missile over the northern Japanese island of Hokkaido, the most brazen provocation of North Korean leader Kim Jong Un’s five-year-long rule.  As one would expect, when this story initially broke after regular trading hours on August 28th, S&P 500 futures quickly collapsed by as much as 20.00 points in overnight trading.  By the next day, however, the event was completely discounted by the marketplace as the US broad market index actually closed slightly higher on August 29th.

This quick reversal higher negated the bearish implications of the pattern in XSD and, two days later, a new, bullish breakout higher from almost three months of sideways investor indecision was confirmed in the PHLX Semiconductor (SOX) Index, which is actually a better proxy for the semiconductor space.  This breakout higher, as shown in the chart below, targets an additional 10% rise to 1214 that will remain valid as long as the midpoint of the investor indecision area at 1086 now contains the index as underlying support. 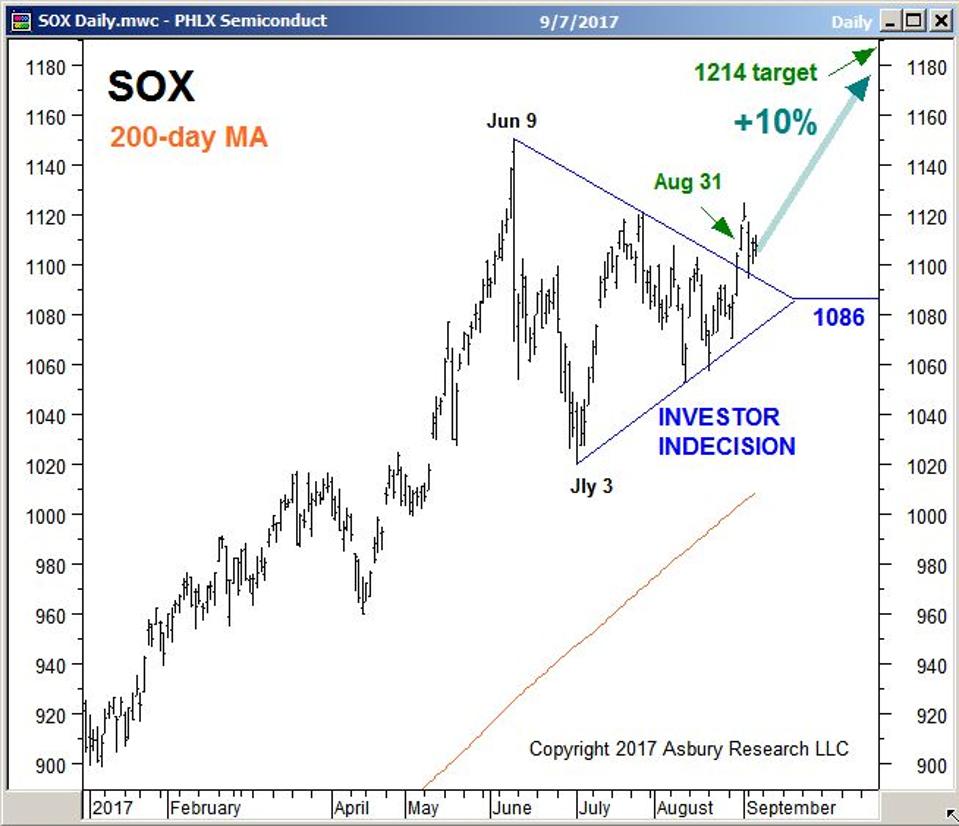 Moreover, the SOX’s current level just above the indecision area provides a favorable risk to reward ratio on long positions which, in my view, is the most important variable in investing and one that I implement every day in the stock and ETF ideas I provide for Asbury Research.  In my view, getting market direction right is very important, but choosing investments with favorable risk to reward characteristics is imperative to successful investing.

The next chart shows that, while recent activity in the SOX Index is indicating investors have collectively shifted to a cautiously bullish bias on the direction of semiconductors, the daily total net assets invested in the iShares PHLX Semiconductor ETF (SOXX), which actually tracks the SOX, are testing the $1.13 billion threshold for the third time since mid June. 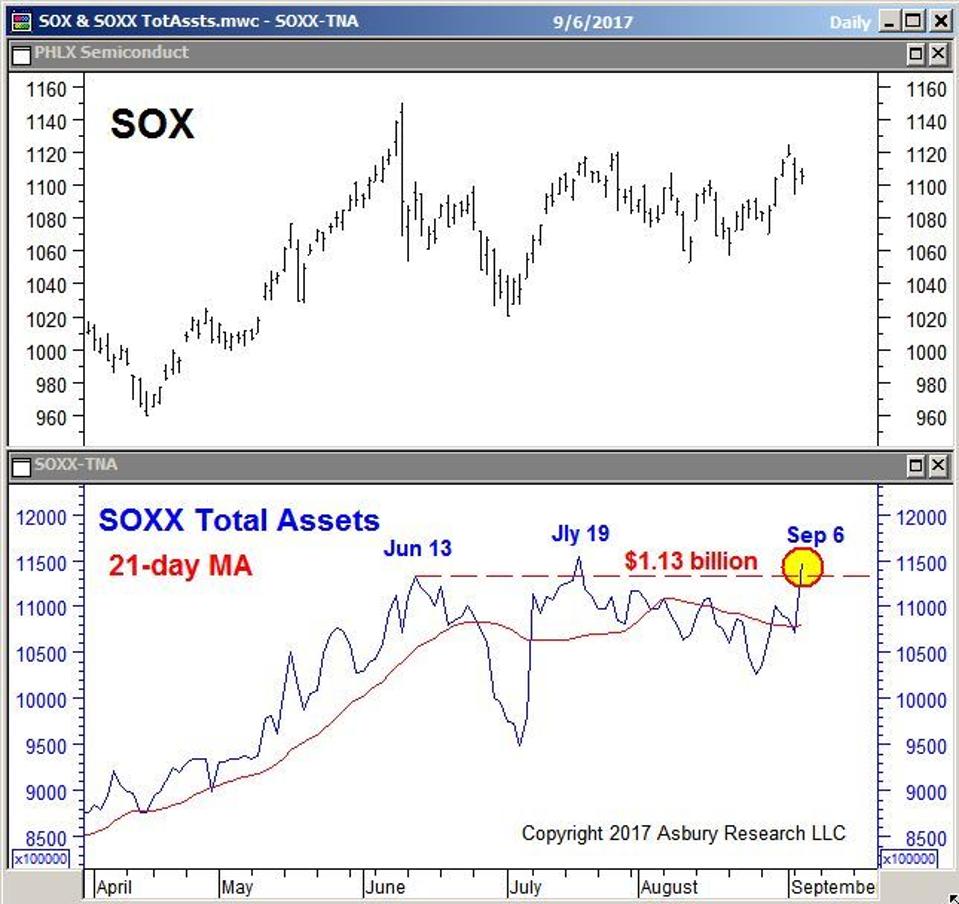 Asset flows measure investor conviction in the direction of asset prices.  If the bullish implications of this recent breakout higher in the SOX Index are to materialize, and in turn lead the U.S. broad market higher into the 4th Quarter, then these assets invested in SOXX must rise and remain above $1.13 billion in the days and weeks ahead to indicate the necessary bullish conviction to drive semiconductors even higher.  Conversely, I would view these assets’ inability to continue expanding from here as a potential early warning signal that the negative seasonal implications shown in Chart 1 above may materialize again this year.

The bottom line is that the 1085 level in the PHLX Semiconductor (SOX) Index, and the $1.13 billion level in the total assets invested in the iShares PHLX Semiconductor ETF (SOXX), together represent a very distinct and important line in the sand from which semiconductor stocks, and the broad market they tend to lead, must either resume their 2017 advance or risk declining in a countertrend correction that could extend into early October.