How We Captured The December Gold Rally

This big spike higher in gold prices has been particularly noteworthy because it took most investors by surprise — it occurred while the  CRB Index coincidentally declined by 9%.

On December 22nd 2015 we published a report that discussed an emerging buying opportunity in gold, following a modest 2% rebound off its $100.53 December 2nd lows.  That report, which appears below in its entirety, displays and discusses some of the metrics we used to get in front of the gold rally.

Recently expanding investor asset flows in gold, from a level that has been identified as a value area by smart money commercial hedgers, suggests an emerging buying opportunity in gold at or near $100.44 in the SPDR Gold Trust ETF (GLD) and at or near $1042 per ounce in COMEX gold futures.

The Smart Money Thinks Gold Is At A Value Area

The blue line in the upper panel of Chart 1 below plots the weekly net position of the Commercial Hedger category in COMEX gold futures according to the Commitments Of Traders (COT) data, which is compiled and published by the Commodity Futures Trading Commission (CFTC).  The latest data shows this trader category, which uses the futures market to hedge their physical holdings of gold, is net short 8,266 contracts as of the latest data (through December 8th). 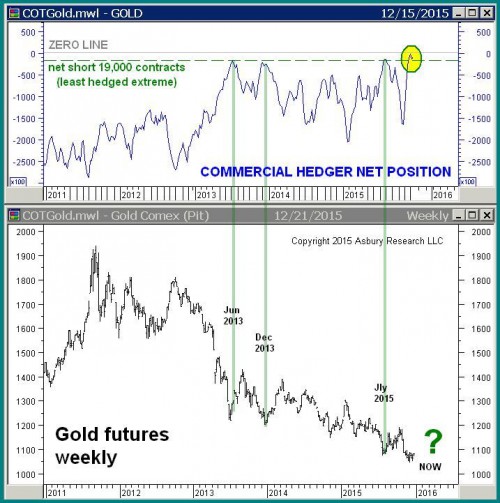 This represents a “least hedged” extreme by the smart money, which indicates that these insiders are betting that this is a value area for gold that does not require more aggressive hedging (against a deeper decline).  The green highlights show that the past 3 similar least hedged extremes, in July 2015, and in December and June 2013, all coincided with multi-month countertrend rebounds in gold prices.

These data suggest that the smart money has identified gold’s current price level, near $1045 per ounce, as another similarly important value area.

Now that the commercial hedgers have identified a value area for gold, the next thing to do is to find the corresponding underlying support level on the charts.  Chart 2 plots the SPDR Gold Trust (GLD) monthly since 2007 and shows that the ETF is currently testing its March 2008 benchmark high at $100.44. 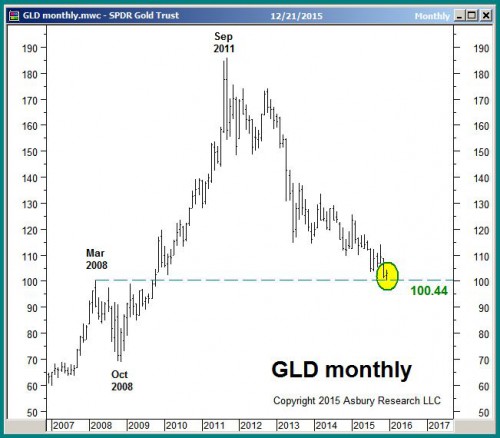 This is the support level that we are associating with the value area as identified by the commercial hedgers.  The equivalent support level in COMEX gold futures is at $1042 per ounce.

Now that we have identified a value area for gold prices via Charts 1 and 2, the next thing to determine is whether other investors see it, too. The blue line in the lower panel of Chart 3 below plots the daily total net assets invested in GLD since July along with their 21-day moving average, the latter which we use to identify a monthly trend of either expansion or contraction. 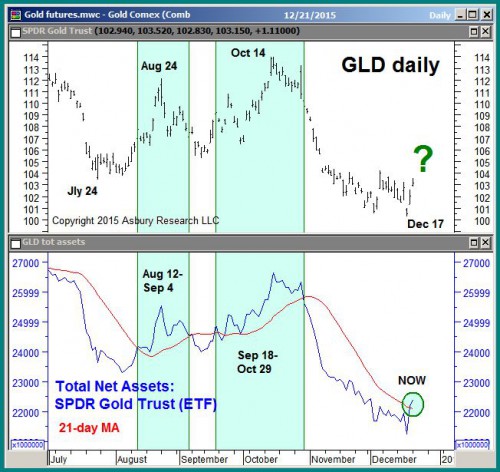 The green highlights show that brief periods of monthly expansion between mid August and early September, and again between mid September and late October, fueled the past two minor rallies in GLD.  Note that these rallies quickly faded once the total net assets invested contracted back below their 21-day moving average.

The rightmost green highlights show that these assets are currently edging above their 21-day moving average.  A sustained rise above the moving average is imperative to indicate that there is enough near term bullish conviction to fuel the rally that Charts 1 and 2 suggest may be emerging.

Assuming that investor assets in GLD continue to expand, the next thing to determine is just how high would prices have to rise to indicate a technical bottom on the charts.  Chart 4 points out that, from a near term perspective, that level is at 104.21, the intermediary high between the two successful tests of 100.44 support on December 2nd and 16th. 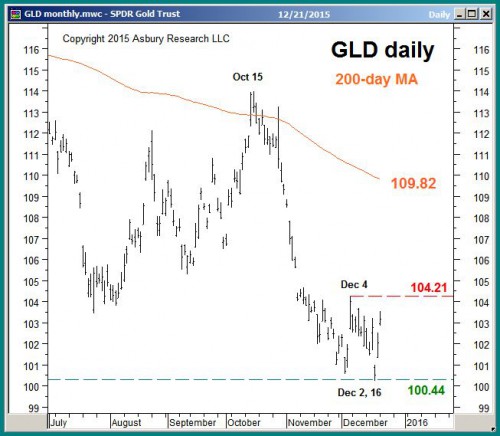 Two consecutive closes above 104.21 would confirm a chart pattern, a double bottom, on the chart that would target an initial rise to $107.75.  Should a rise to 107.75 occur, it would clear the way for more near term strength and a potential test of 109.82, which is major overhead resistance at the 200-day moving average.

A sustained move above the 200-day, a widely-watched major trend proxy, would be necessary, however, to indicate that the February 2013 downtrend as defined by that moving average is over, and that a new major uptrend is emerging in its place.

Asbury Research’s focus is the entire US financial landscape including the US stock market and market sectors, US interest rates, the US Dollar, and economically-influential commodities like copper, base metals and gold.  Our scope is global, however, as we use our own database of intermarket correlations to determine how overseas markets are most likely to influence the direction of asset prices here in the US.

Asbury Research’s goal is to find new investment opportunities first, when they are still out of favor with the professional investment community and way before the financial press starts to talk about them – the latter which often occurs when the move is almost over.

Asbury Research  subscribers can view our recent and current analysis on gold prices by logging into the Research Center via the big gold button in the upper right corner of the screen.

Interested investors can request more information about us, including sample research, services and pricing, by visiting our Contact Us page or by calling 888-960-0005.