One of the many reports we produce for subscribers is called What We’re Watching Today (WWWT).  WWWT’s are typically short, 1-2 chart reports that are emailed to subscribers before the market opening.  Their purpose is to identify important, potentially market-moving changes in  market conditions as they occur.

We have included below the entire WWWT from the morning of March 3rd, 2017. entitled Jenga Market” Could Trigger An Overdue Decline.

The report featured our extensive database of ETF asset flows data, which allows us to “follow the money” on virtually any financial asset that can be traded with an ETF.  It helped to identify the current March 1st peak in the benchmark S&P 500 just 2 days after it was put into place, and long before there was really any other tangible evidence that the US market was peaking.  SPX has since declined by an additional 61.oo points or 3%.

The total net assets invested in the SPDR S&P 500 ETF (SPY) expanded by a huge amount over just the past two sessions, by $12.9 billion or 5.5%, which creates a near term top-heavy condition that we call a “Jenga Market” after the popular block stacking game.  Moreover, the S&P 500 (SPX) is currently edging below 2380, which defines the lowest possible index level that this 5.5% of new investor assets could have been added.  This means that a sustained move below 2380 would quickly put all $12.9 billion of these newly-added invested assets into the red, which could at least trigger some quick long liquidation and perhaps even an overdue corrective decline. 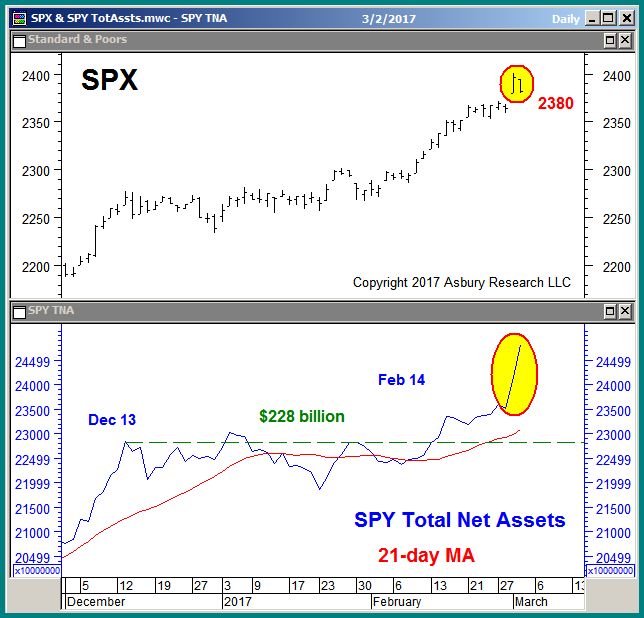 This quick and aggressive performance chasing has resulted in a Jenga-like, top heavy broad market index in which a relatively small index decline, below SPX 2380, would quickly and immediately put 5.2% of the total assets invested in SPY into the red.

We have seen similar “Jenga Markets” trigger larger, multi-week corrective market declines so, although this is in no way a sell signal at this point, it is something important to be aware of.  Specifically, we will be watching closely to see if  a sustained move below SPX 2380 triggers enough investor fear, according to metrics like the VIX and high yield corporate bond spreads, to fuel a deeper broad market decline.

Asbury Research subscribers can view our latest analysis of ETF asset flows, along with the rest of our investment research, by logging into the Research Center via the big gold button in the upper right corner of the screen.

Non-subscribers can request more information about us, including service and pricing options, by visiting our Contact Us page or by calling 888-960-0005.