Opinion: Technicians vs. analysts in a CNBC stock-picking slapdown: Who wins?

CHAPEL HILL, N.C. (MarketWatch) — The age-old debate between technicians and fundamental analysts appears to be on the verge of being answered.

Over investment horizons ranging from one month to one year, top technicians come out well ahead of leading analysts.

In fact, according to the academic study that reached this conclusion, it’s not even close: While the average buy recommendation from well-known technicians outperforms the broad stock market by 8% over the subsequent nine months, the average stock recommended by leading fundamental analysts underperforms the market.

This groundbreaking study, which just began circulating in academic circles, was conducted by Doron Avramov and Haim Levy, finance professors at the Hebrew University of Jerusalem; and Guy Kaplanksi, a finance professor at Bar-Ilan University. The focus of their study were a thousand pairs of recommendations made between November 2011 and December 2014 on the TV show “Talking Numbers,” which is jointly broadcast by CNBC and Yahoo YHOO, +1.56%  . The first half of each pair was a recommendation from a top technician about a stock in the news; the second half was a recommendation about that same stock from a leading fundamental analyst.

In retrospect, Professor Avramov told me in an interview, it’s curious that no one before bothered to analyze these recommendations, since the show provides an ideal laboratory for comparing the relative worth of the two investment approaches.

The researchers measured the performance of each recommendation beginning with its closing price on the day the show first aired. That’s a crucial methodological detail, since that means the researchers are excluding the price impact of the recommendations in the first minutes after the show airs. 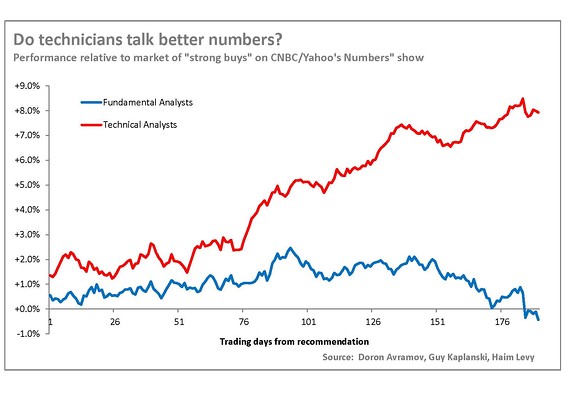 Click the highlighted title at the top of the page to view the entire column on MarketWatch.com.