In 2013 we introduced our Correction Protection Model (CPM) to Asbury Research clients and subscribers.  CPM was created to satisfy client requests for a completely data-driven and repeatable methodology that objectively determined if investors should be adding or subtracting risk from portfolios.  Since then CPM has continued to evolve, with newer and better inputs to keep up with changing market conditions.

CPM was initially designed as a defensive model to:

The strength and simplicity of CPM is its ability to reduce the inherent systematic risk of investing in the stock market.  This can be seen in the model’s low beta, its significantly lower drawdowns, and lower standard deviation (risk) when trading the S&P 500.  However, while significantly reducing risk, CPM also tamps down performance. There is no free lunch in financial markets.  If you risk less, you make less.  But we have found that by incrementally adding some of that risk back into the modeI, by using leveraged ETFs to trade it, CPM’s character and performance quickly changes from defensive to offensive.

All three use the identical CPM Model Risk On and Risk Off signals.  The only difference between them is that, as we build risk back into the model via leveraged ETFs, the performance also significantly improves.

CPM was initially developed for older or more risk-averse investors who want or need to participate in the stock market, but are uncomfortable with the risk.  The tables and chart below are based on using the SPDR S&P 500 ETF Trust (SPY) as the trading vehicle.  On average since 2011, trading CPM signals with SPY have underperformed the S&P 500 (SPX) by 3.4% per year, but with less than half the maximum drawdown and a fraction of the risk according to standard deviation and beta. 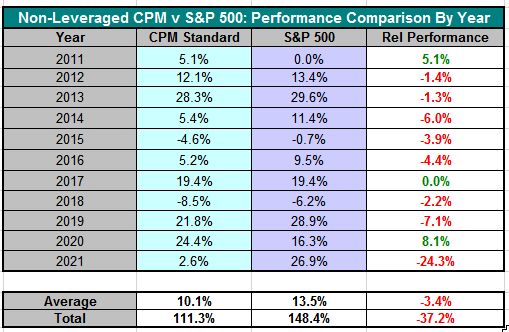 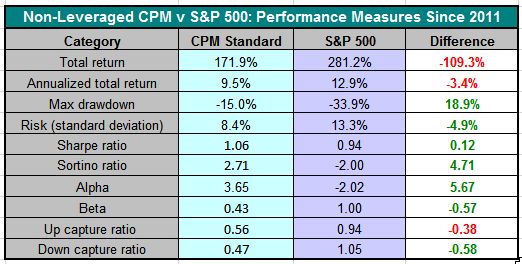 This version may be more suitable for investors willing to accept a bit more risk than non-leveraged CPM for the potential of producing better-than-average returns.  On average since 2011, CPM signals using SSO have outperformed the S&P 500 (SPX) by 6.3% while still maintaining a slightly lower maximum drawdown and a slightly lower beta than the S&P 500. 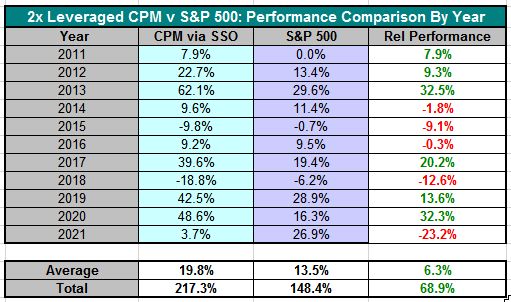 This version may be of interest to more aggressive investors willing to accept additional risk for the potential of significantly outperforming the market over time.  On average since 2011, CPM signals using UPRO have more than doubled the average annual performance of the S&P 500 (SPX), but with a 23% larger maximum drawdown and a 30% higher beta. 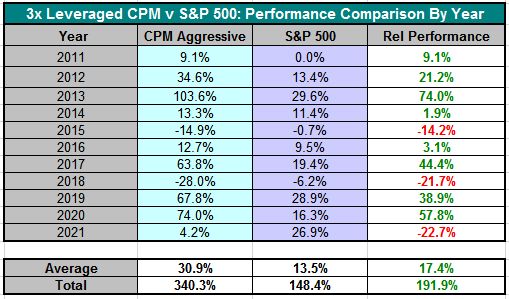 Information about the various quantitative metrics referred to above can be found on Investopedia.com.

Disclosure: All investment models have inherent limitations in that they look back over previous data but can’t see into the future.  Hypothetical past performance does not guarantee future results.  Attempting to avoid a market decline by moving to cash comes with the inherent risk of potentially missing out on upside performance.  However, we believe our model’s hypothetical performance data is a testament to intelligent quantitative risk management, showing that a conservative, systematic, and repeatable process of active management can, over time, significantly outperform passive buy and hold investing.  Asbury Research’s models and investment research are used to inform our subscribers and clients but do not imply an actual investment portfolio.

Disclaimer: The information above is provided for information purposes only and is not intended to be a solicitation to buy or sell securities. Past performance as indicated from historical back-testing may not be typical of future performance. No inferences may be made and no guarantees of profitability are being stated by Asbury Research LLC.  The risk of loss trading in financial assets can be substantial, and different types of investment vehicles, including ETFs, involve varying degrees of risk.  Therefore, you should carefully consider whether such trading is suitable for you in light of your financial condition.