A June 11th email to subscribers announced that we were working on a new stock and ETF picking model that was based on buying weakness, rather than buying strength as our existing model has been doing since late 2016.  We call the new model Asbury Value.

We actually began developing this new model back in March, after the S&P 500 had been drifting sideways since late January.  At that time our current model, which identifies momentum breakouts and which had performed very well since we began publishing the signals in September 2016, stopped performing nearly as well.  This was because the model was trying to capitalize on momentum breakouts in individual stocks, but within a broad market environment where there was no positive momentum.

Our new Value model, which we have now been tracking in real time since May 1st, has 33 closed out trade ideas thus far and is doing what it was designed to do — actually taking advantage of the current non-trending, choppy market environment to buy good stocks that have had a substantial correction.

Of 34 closed Value trades since May 1st:

Especially within the current non-trending broad market environment, where the S&P 500 is up just 1% for the year, we are pleased with this performance so far.  More important, we believe Asbury Value will make an effective “partner” for our current momentum signal (Asbury Momentum) which, as the table below shows, has performed very well during the trending environment from inception through 2017. 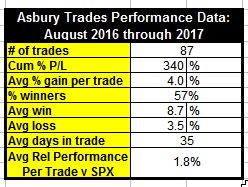 Effective immediately, all new Asbury Value ideas will be published in our trade ideas table in the Research Center, under the heading “Type” as Value.  All ideas from our existing signal will be listed under the heading Momentum.