The following is a summary of our recent interview with John Kosar, which can be accessed on our site here or on iTunes here. 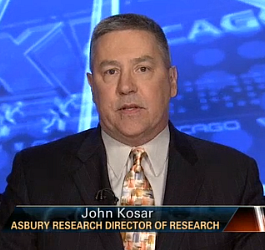 To make a baseball analogy, technician John Kosar told Financial Sense Newshour that we are probably in the eighth or ninth inning of the current Trump rally.

“There are the usual suspects that we see when we’re getting a little bit frothy,” he noted. “We’re getting near the end of … a near-term swing, a quarterly swing.”

Investor sentiment is at overly bullish levels, and we’re seeing overbought conditions, he stated. The S&P 500 is around 9 percent above its 200-day moving average, which is historically frothy.

As a result, it may be time to take a bit of a break here and put less money to work, he added.

Though we don’t typically see stocks rise along with interest rates, that’s what we’re observing currently.

Commercial hedgers – the smart money – are holding historically large long positions in the 30-year T-bond, Kosar noted. For him, this signals that the smart money is betting on a move higher in the price of the T-bond, and a move lower in interest rates.

“Everyone is talking about interest rates going to 3 percent,” he said. “I believe that too, but I think that’s an end-of-year story. For right now, these smart money guys – who are not market timers, they’re value finders – are telling me that there’s a value in the price of long-dated treasury securities right now, which suggests interest rates are going down.”

If that happens, per the correlation between the yield in the 10-year and the S&P 500, we’re likely to see the price of bonds moves up sometime this quarter, with yields falling. We’ll also get some kind of a pullback in the stock market, for which he thinks we’re overdue.

Inflation on the Horizon

He thinks a pullback will emerge this quarter, then ultimately we’ll see higher interest rates and a stronger stock market emerge. Like last year, Kosar expects we’ll see markets down in the first part of the year, with a return to gains and inflation creeping in later in the year.

While geopolitical events might spook the market, as long as we don’t break the lows we saw in November, he sees a pullback as being healthy.

“We have been telling financial advisors since the beginning of the year not to put a large chunk of money down into the market here because it looks a little top heavy,” he noted. “You tighten your stops, but you don’t get out yet.”

In the meantime, he recommended picking individual stocks. He’s liked the technology sector for months and he’s overweight healthcare, as well.